If you were one of them, what would you do with the $6.8 million windfall?

For Singaporeans, we would probably pay off our loans first. Then go buy a nice house and a luxury car. Afterall, we are a car proud and property obsessed country.

What would I do with $6.8 million? There is no debt to pay and nobody to show off to. And I really can’t think of anything that I really want to have but can’t afford to buy now.

But it would be stressful to suddenly have so much money. Because the thought of leaving the huge sum with the bank would make me feel guilty. I would end up spending days and nights researching what to invest now and how to donate to the right cause.

After that, hopefully I could get back my peace of mind – by doing the same things I used to do and living the same life I used to live.

Why winning the lottery is not a good thing

Does winning the lottery guarantee living happily ever after?

It has nothing to do with sour grapes. But contrary to common belief, lottery winners are not as lucky as what we imagine.

It is considered not too bad if they spend all their fortune in a short period of time and go back to square one. In reality, many end up worse than what they used to be.

Like wealth, luck is created by a process, not by an event.

Ken Fisher talked about the “lottery curse” in his book The Ten Roads to Riches.

“… this is a fate you shouldn’t hope for because of the well-known and documented lottery curse. Tragedy doesn’t promptly damn every huge lottery winner, but it does more often than not. And it will damn you, too.”

“For example, Jeffrey Dampier Jr … won an Illinois lottery – $ 20 million … showering his parents and nine siblings with gifts, trips, cars, and homes. He even treated his wife’s family. But it wasn’t enough for his wife’s sister, Victoria. She and her boyfriend kidnapped Jeffrey and shot him dead.”

“Jack Whittaker won a 2002 $315 million Powerball jackpot. Soon his wife left him (money can’t buy love either), his much-loved granddaughter died from a drug overdose, and his daughter was diagnosed with cancer … his car was burgled. Thieves almost got $600,000 … His money was hard to keep track of too. Whittaker repeatedly wrote bad checks — was even sued by an Atlantic City casino for check-kiting. In all, he estimates he’s been involved in over 460 court actions … That’s misery, not rich. It reminds me of the famous Mexican curse, “May your life be full of lawyers.”

The following SOS guide comes handy for any situation when you find that you are suddenly rich – be it from winning the jackpot, closing the en bloc sale, inheriting a huge sum, or selling your own business.

After you receive your jackpot, your priorities in the sequence of importance should be as follows:

#1. Ensure you and your loved ones’ safety;

#2. Enhance your ability to keep your fortune; and

#3. Embrace your happiness and well-being.

Priority #1: Ensure you and your loved ones’ safety

He told the reporters about the stress. “From the day I found out that I won, I’ve been sick. My head hurt me for three days because I was thinking so much … I had a bellyache for two weeks. Sometimes I feel so much pain I forgot that I won.”

To protect his identity, he waited 54 days before coming to collect the prize, with a mask from the horror film “Scream”. 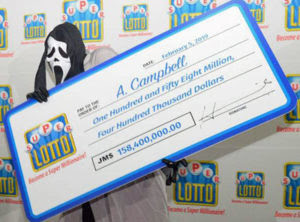 He was not the first one. Last year’s winner wore an Emoji mask to the cheque presentation ceremony. With high crime rate in Jamaica, lottery winners are under the threat of being kidnapped or blackmailed by friends, relatives or strangers.

A few years ago, a stranger tried to rob my father-in-law in broad daylight at a Johor Bahru petrol station. Luckily he managed to fight him off and was unharmed.

His friend told him later that his Singapore car license number was the same number as the first prize of 4D results earlier that week. But he doesn’t even buy lottery!

If you win the jackpot, resist the temptation to let anyone know. Okay, you can let slip if your spouse asks you. But don’t go beyond that – not even your children, parents, relatives, friends, colleagues or people you know or don’t know.

The sad truth is: Greed is real. People change when they see that you are suddenly rich. Unless you want everyone around you to treat you differently, but not in a genuine or sincere way. It may be a boost for your ego. But you are sacrificing your relationship and safety for it.

Priority #2: Enhance your ability to keep your fortune

An informal research tells us that those who bag $500,000 from Toto normally spend all in six months. Those who get $1 million usually have nothing left after a year. Statistics show that close to 70 percent of lottery winners spend or lose all their money in less than 5 years’ time.

Why? Because lottery prizes are often won by people who have never had so much cash before. They don’t have the experience to manage such a big amount of money.

The reason is, more money is not a solution to poor financial management. Poor money management is like gambling at a casino, because, over time, the house always wins. Tossing more money at the deficiency is like trying to plug a hole in a dam with more water. More money doesn’t buy financial discipline.

Lottery winners fall into the millionaire trap and go broke because they attempt to live a ‘millionaire’ lifestyle, not understanding that a few million doesn’t go very far.

A good way to preserve your windfall is to practise delayed gratification. Resist the temptation to do or buy anything new. This is the most difficult part because most winners will focus on how to spend the money “now”.

What they immediately do is often to buy a big house. But you can try to rent at least for the first two to three years. That gives you sufficient time to study the market, tell the differences between a good and a bad house, and find what is really suitable for you.

The same applies to any asset you want to acquire, any investment or business you want to commit.

If you have never been an expert in properties, stocks, commodities, currencies or any other type of investment, resist the temptation to go into it.

When you have money to lose, you are going to lose big.

This is especially true when those so-called financial experts who try to convince you to hand over your money so that they can invest on behalf of you.

“One not so-fortuitous outcome is investment into complex financial products, introduced by bankers who target en bloc sellers.

Several banks have sent relationship managers (RM) to condos which are sold en bloc to woo the newly-rich.

“The dumbest investment was listening to my RM to punt in dual currency,” says the retiree. “She took me around the world; I did one on Aussie when it was 1.30 to one Singapore dollar, another on sterling.”

One Aussie dollar was worth less than one Singapore dollar, at the end of last year.

“All lost money. She then suggested investing the Aussie dollar into Aussie bonds, and I am still trying to recover,” she adds. “RMs are so smart, they see a big deposit into the account, they come calling.”

Read as much as you can about personal finance and financial investment. Then test it out with something very small first. Only after you pay your “school fee” and learn your lessons should you start doing any real investment.

Priority #3: Embrace your happiness and well-being

Say you win a jackpot of $6.8 million. You can negotiate with the bank for a fixed deposit with two percent annual interest that gives you $136,000 a year or $11,333 a month. That should be enough for a comfortable daily living, while avoiding anyone’s suspicion of your wealth.

Ask yourself: How much do you really need for a comfortable living? What sort of lifestyle you really feel is comfortably acceptable to you?

True happiness and well-being comes only from living the lifestyle you are comfortable with, not what other people believe in.

Scotland’s youngest lottery millionaire Jane Park was just 17 when she won £1 million. She immediately spent lavishly on branded goods and went on plastic surgeries. Then she bought a big house to stay on her own.

But three weeks later, she moved back to stay with her mum.

“I was not prepared for the loneliness and isolation of being away from my family and friends.”

Next, the mother and daughter went for a luxury holiday in a beach resort in Spain.

“I find the more expensive hotels the food is too posh or the people are a bit snobby. I’ve got ordinary tastes. I like going on holiday and being around people like me.”

A year after being a millionaire, Jane finally understood the true value of money.

Wealth is not authorized by material possessions, money, or “stuff”, but by what I call the three fundamental “F’s”: family (relationships), fitness (health), and freedom (choice). Within this wealth trinity is where you will find true wealth and, yes, happiness.

IT expert with more than 20 years experience in Multiple OS, Security, Data & Internet , Interests include AI and Big Data, Internet and multimedia. An experienced Real Estate agent, Insurance agent, and a Futures trader. I am capable of finding any answers in the world you want as long as there are reports available online for me to do my own research to bring you closest to all the unsolved mysteries in this world, because I can find all the paths to the Truth, and what the Future holds. All I need is to observe, test and probe to research on anything I want, what you need to do will take months to achieve, all I need is a few hours.​ View all posts by Gilbert Tan TS

This page, by Strike 4D and Toto, is licensed under a Creative Commons Attribution License.

“The New Economy – The Perfect Economy” Podcast by Oogle